Thank you for coming by to share some of my creative reflections. ~ Julie Williams

>  > Slipping past the edge of twilight
>  >  Hovering ‘neath the starlit sky
>  >  Amber huntress broke the silence
>  >  Darkness rang with haunting cry
>  >  Onyx hid her whispered passage
>  >  While a peace the night belied.

Heights
Gliding on the silver breezes
Arcing through the turquoise light
Alabaster wings unfolding
Bear me far from mortal sight.
Hanging on these golden currents
Grandest of the soaring things,
Life takes on a whole new meaning
Viewed from here on outstretched wings.
Glistening in the morning sunlight
Pinions etched in purest black,
Troubles fall to earth from heaven
Watch me fly—I won’t look back!
Pelicans of the inland byways,
Birds of earth and air and sea,
Graceful in their ivory glory
Help lift my weighted heart to Thee

Posted by The View From My Saddle at 1:43 PM No comments:

High notes of laughter
And Christmas carols
Echoed across the frozen lake
As eight girls on horseback
Left the woodland trail.
Bundled against December’s bitter cold,
We went caroling, caroling,
Through the falling snow.
High school girlfriends
Sharing the joys of the season---
Riding fat, furry horses that tossed pretty heads
And snorted great plumes of steam.
The horse’s warmth rose from shaggy coats
Up through our legs---We were glad
We’d left the saddles behind.
Sleigh bells jingle-jingled as hooves squeaked
And crunched along snow-packed roads.
Girlfriends on horseback, wrapped in woolen hats
And scarves, clutching songbooks with mittened hands.
We gathered in front of homes and farmhouses,
Lifting our voices against snow-laden hills.
Joy To The World and Let There Be Peace--
Ring out ye Silver Bells.
Deck The Halls with mirth and merry;
We sang The First Noel.
Neighbors were so delighted
By this most unusual sight---
Eight girlfriends on fat, furry horses,
Heralding Christmas, ‘cross fields of pure white.

Posted by The View From My Saddle at 1:37 PM No comments:

Summer days have drifted by like soft clouds in a blue sky; a gentle breeze pushed them out. How did autumn get here so fast?

September mornings are a far cry from June when birds roused us out of bed to 5 am sunshine. I leaned against the kitchen sink, filled the coffee pot and stared at the sunrise. I was captured while water overflowed down the sink. Sunrise trembled at dawn's edge.

I quickly filled the coffee maker, added coffee, pressed the button and turned back to the light show. The edge of the scarlet fireball arose and punctured the black velvet sky, more intense with each blink of the eye. "Red sails in the morning, sailors take warning", say mariners. Charcoal clouds were building up from the southwest.

The weatherman said the afternoon would clear, so Rafter Red, the young Australian Shepherd, and I were keeping our afternoon date to ride at Carol's. The dog still hadn't figure out how to load up in the car on his own. I laid the leash along the length of the seat, opened both back doors, and called him from one door while he looked thru the other. He finally climbed in. He worried about the whole thing, but we soon were driving down the rain-spattered road.

Red is such a friendly dog--didn't chase Carol's cats and was learning other ranch rules from Carol's dog, especially how to be a good guest.

I showed Carol what I learned at the Mustang horse demo at the farm show about releasing the hind quarters by blocking rather than driving them over--we used her gray gelding. Then we took the palomino mare and the older Paint, High Top, out to the arena. The dogs ran back and forth along the fence line, then came in and Red kept pace with the mare I was riding. Around and around the arena we rode until the rain whispered down.

When the sun peeked back out we went into the big pasture and gave the dogs a good run. Red just loves going along. Between his youth and his lankier build and less furry coat, he doesn't get as overheated as my old Aussie dogs used to. We rode to the big windmill and tanks and splashed thru the overflow--fetlock deep, horses and dogs splish-splashed thru the clear water, feet stirring up clouds of silt. We followed the southern fence line, riding in and out of deep dappled shadows and brighter sunshine and we took note of where the storm felled trees and branches across the barbed wire.

The clouds were breaking up: broad patches of bright blue coming thru, clouds breaking up into clusters of white and pale gray. It was a perfect riding afternoon! We had such a nice time--it put us in touch with those teenage girls still lurking in our hearts--the girls we used to be, ambling with relaxed pleasure across September on colorful horses along side joyful pup' dogs. Does it get much better? Nah, probably not.
Posted by The View From My Saddle at 6:40 AM 2 comments: 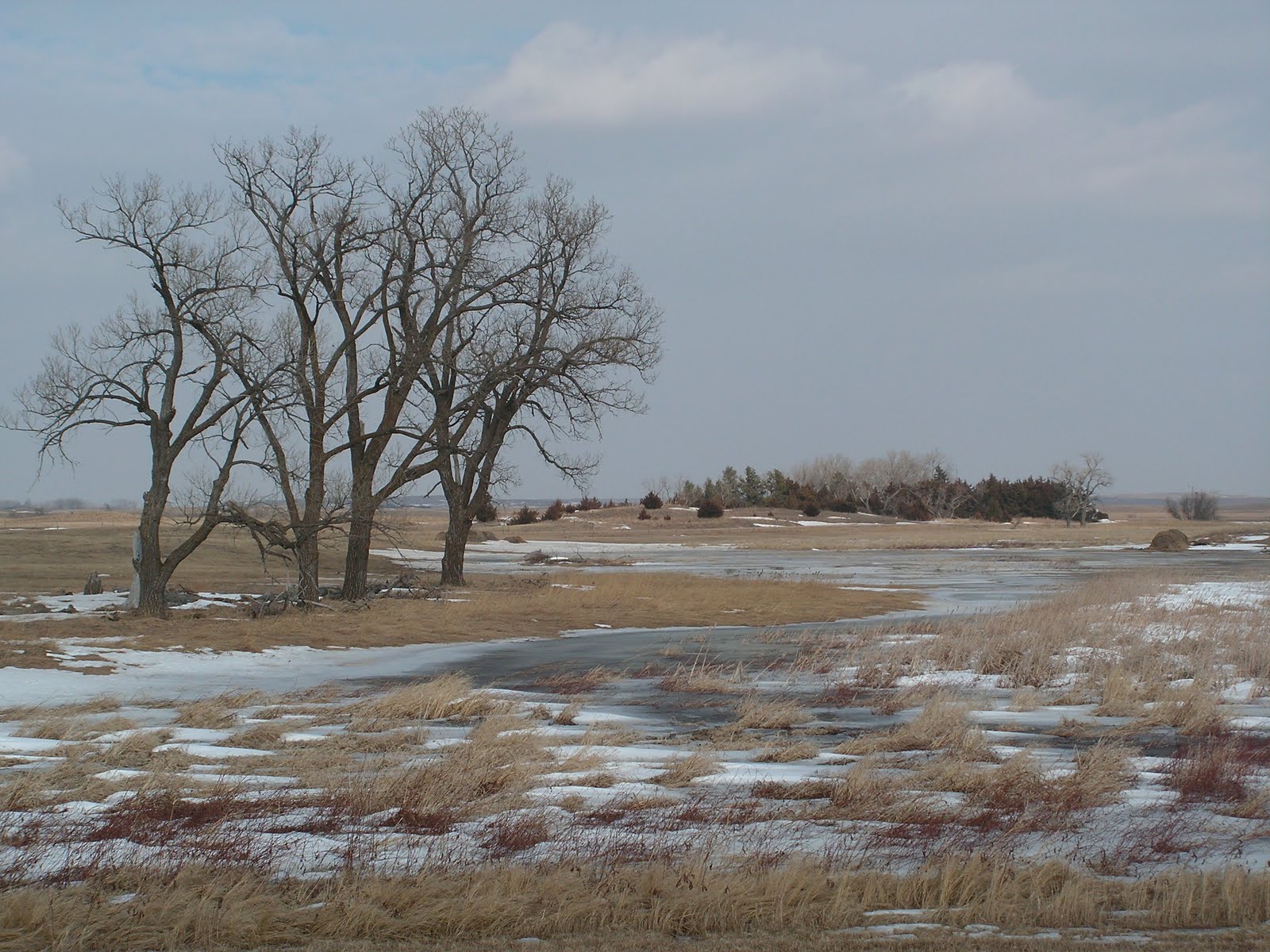 Starved For Spring
I stood at the juncture between two seasons,
Listening to northbound Snow geese overhead.
The skein of geese cut across the cold blue horizon.
Frost sparkled in the morning’s light
On every pale blade of grass,
And each barren branch.
The garden plot lay deep in winter’s slumber
But along the pasture’s edge,
Between two lone trees,
The air was alive with notes and trills.
Harbingers of spring,
Two red-winged blackbirds called,
Testing this dawn of Spring. 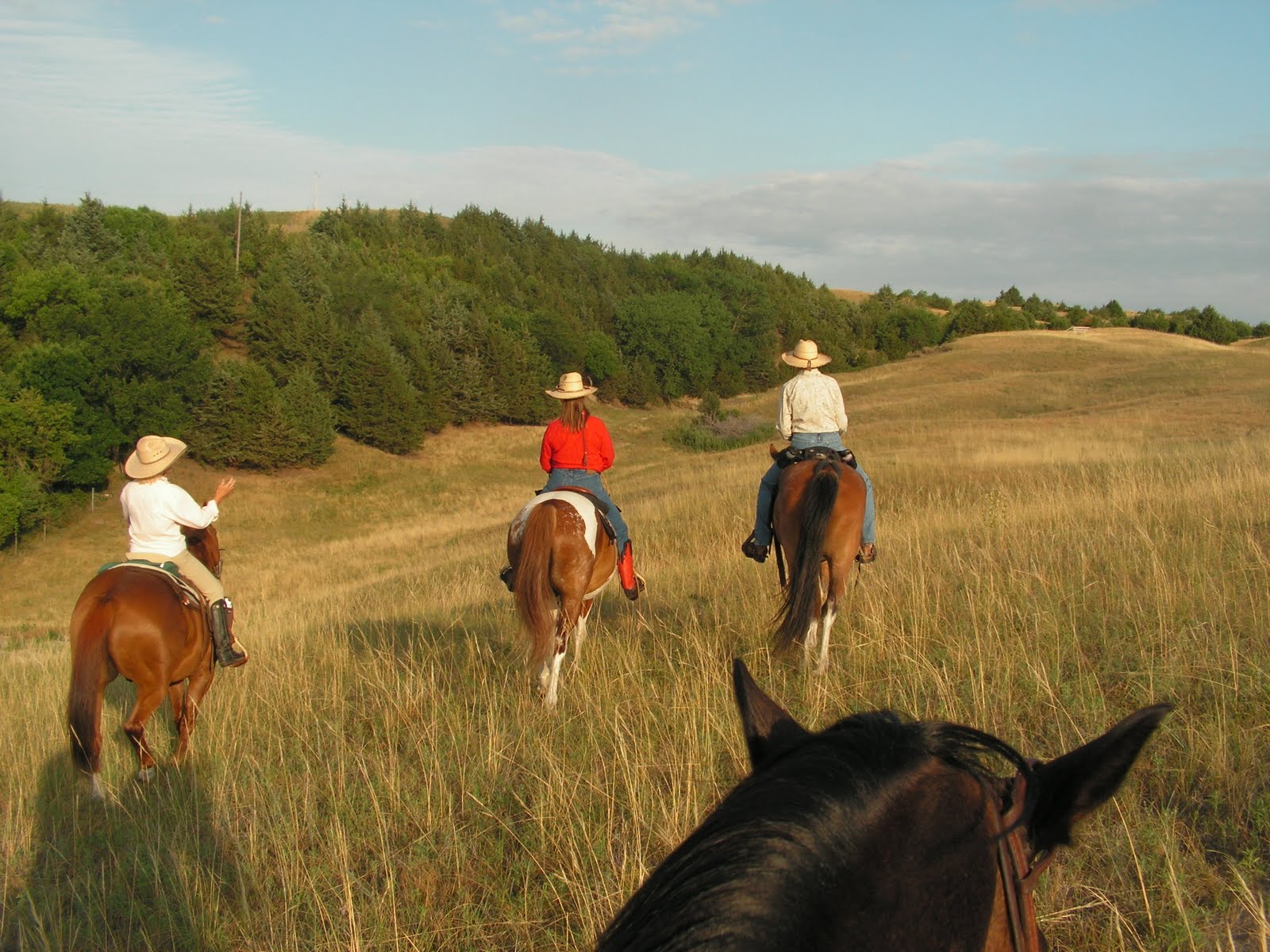 Friendship is
A family that
Ministers to our
Inner hearts;
Loving stronger,
Year by year.

Gallop Through The Valley 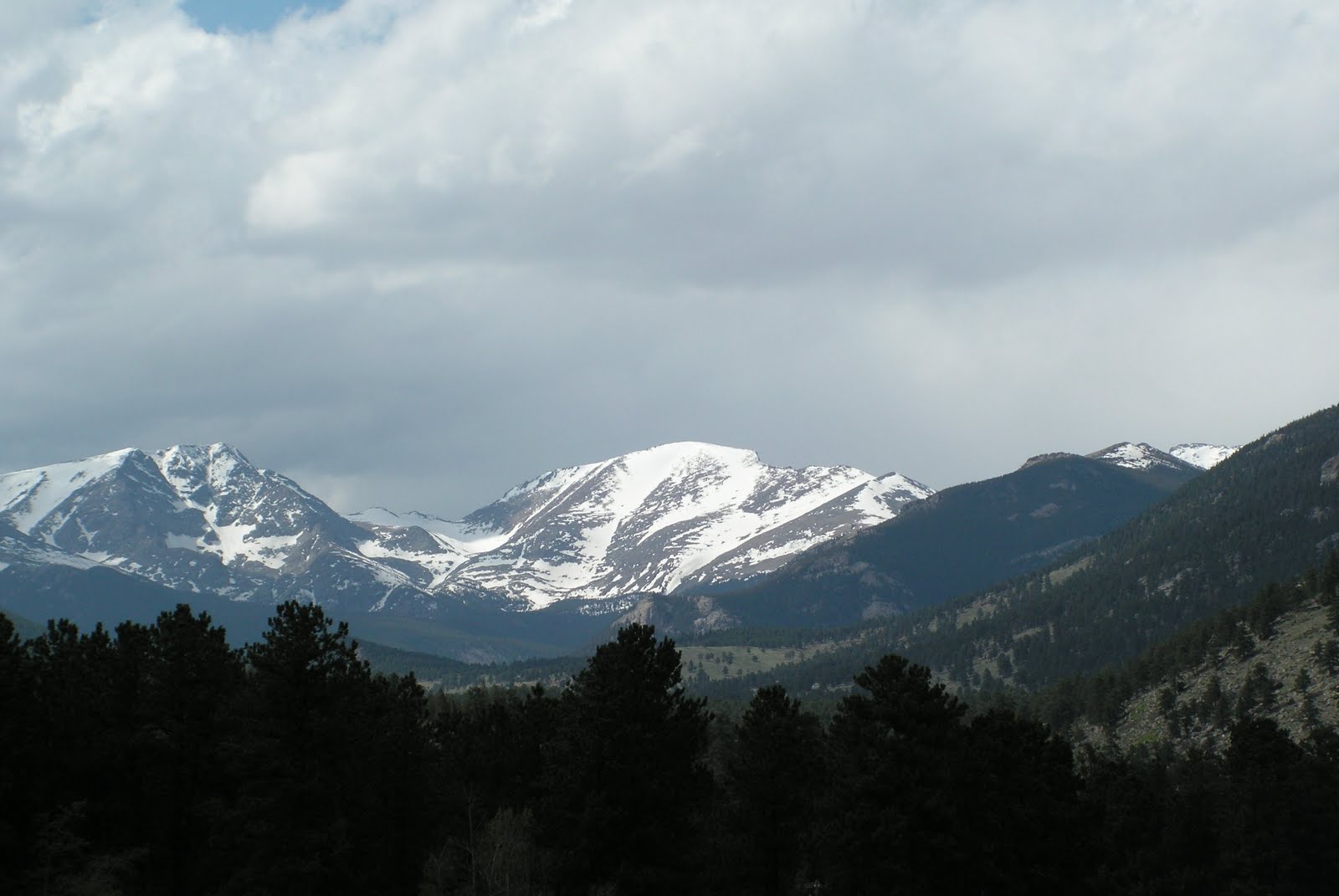 Gallop through the valley
Ride upon the breeze,
Reach up toward the mountains
Get up off your knees.

Lift your arms in reaching
Onwards towards the heights
Dawning moves towards mid-day
There are no more nights.
Julie Williams (c)
Posted by The View From My Saddle at 7:14 PM No comments: